A collection of various tech tips, customer suggestions, and other helpful information regarding the installation and use of KickMagic systems.

Please feel free to send us anything you might think helpful to the KM user community.

KICK START PEDAL MOD for more clearance:
Bob V installed a KickMagic system on a ’68 Bonnie and has ground off the “stop” on the kick start pedal, which allows it to turn inward fully 180 degrees. According to Bob, “As we discussed, I adjusted the kick starter by filing down the connector, which allows it to now be rotated additional 90 degrees and greatly increases the room for your right leg while riding. (See attached photos) It only took about 10 minutes to modify and there have been no issues during starting or reset of the kickstarter.” Our design philosophy was to not permanently modify the bike in any way, but we think this is a clever way to give yourself more clearance if you need it with minimal modifications. 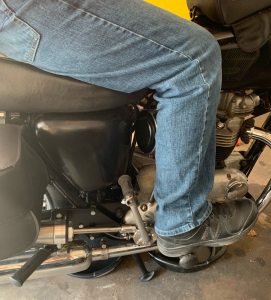 KICK START SHAFT & QUADRANT GEAR DIFFERENCES:
There are two different kick start shaft part numbers and two different quadrant gear part numbers over the 63-79 range.  The later shafts are longer by about a quarter of an inch, The later quadrant ‘clocking’ positions the kick start lever slightly more forward (clockwise).  The later shaft and quadrant gears were in production on the left hand shift 750’s only.  Since the longer shaft moves the Kick Magic combination shaft outward, the spacers in the 750 kit move the pneumatic actuator mounting plate out the same amount so the actuator, leaf chain and combination shaft align properly.  We’ve had at least one case of an early 650 bike that was restored/rebuilt with the later 750 parts and the 650 spacers and bolts were not long enough.  Once discovered, the owner decided to install an early shaft.  But, thicker spacers and longer bolts would also work.  If you suspect you have any kick start shaft/quadrant gear monkey business going on, give us a buzz and we’ll help you sort it out.  Below are a couple of pictures to help you identify the various parts.  Note the later quadrant gear has an extra tooth (red) and a different “stop” profile (yellow). 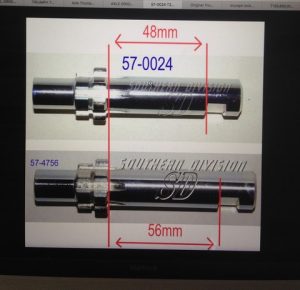 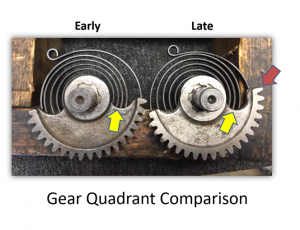