I am saddened to report that Nick Woodbury, a founder and co-owner of Classic Bike Experience (CBE), passed away on January 29, 2020. 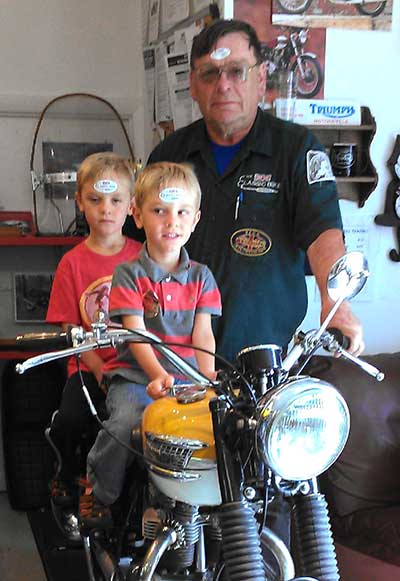 I had known Nick Woodbury for close to 35 years, dating back to our days at then GE Aerospace (later Lockheed Martin and then General Dynamics). His career as an advanced manufacturing engineer spanned the careers of many, many young engineers who learned that 50% of design meant thinking about how you are going to make the damn thing. If you were willing to learn, he had all the patience in the world and those smart enough to realize that, learned a lot. He was forever curious on a wide range of subjects, not just technical. He loved to read and was a Renaissance man with dirty fingernails.

His great joy was our shop and especially the people (and bikes) it attracted. Nick’s voice was the one most people heard when they called the shop. Advice was free and plentiful, but stopped short of BS. If he didn’t know something or was offering an opinion and not fact, you knew it. No fake news with Nick. “You can’t fool physics,” was one of his recurring themes.

A few years back, we had the opportunity to blend all those “professional” aerospace years with our mutual love of vintage British motorcycles (especially Triumphs… Nick was a Triumph guy) and a desire to share that knowledge with emerging young engineers. The KickMagic Pneumatic Starter was developed in conjunction with a senior engineering project team at the University of Vermont. Nick really loved that experience. 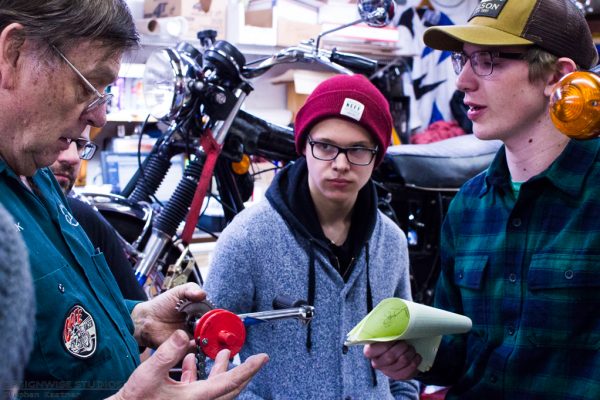 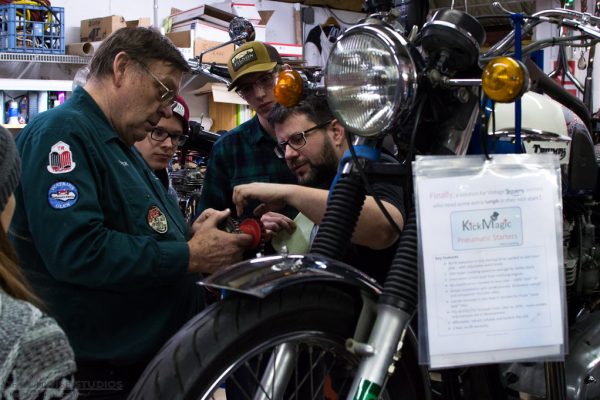 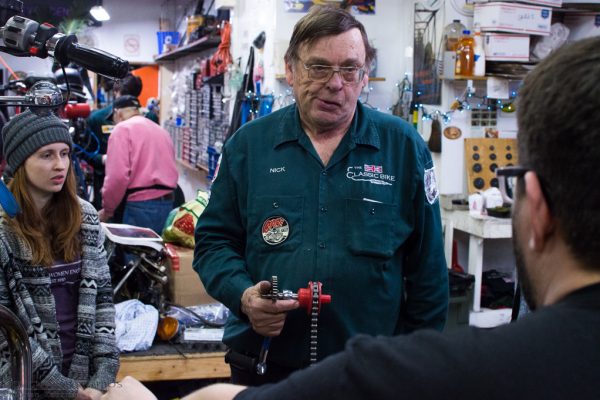 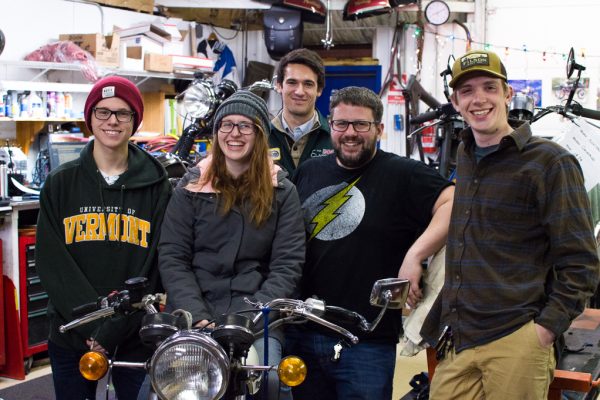 Join us once the COVID quarantine lifts, for the 1st Annual “Wandering Woodburys Ride”

The Woodbury family and friends had a quiet gathering the weekend after his death, but asked if we would sponsor a “Nick Ride” on his birthday, April 26 (a Sunday this year). He always strove to have his first ride of the year on his birthday. Notably, Nick was also a hot-rodder and often repeated his favorite line, “If I had all the money back that  I’d spent on cars and bikes… I’d spend it on cars and bikes!”

At some TBD date, we plan to launch the first annual “Wandering Woodburys Ride“ a spring breakout event including motorcycles, hot-rods, and friends–anyone on a motorized vehicle who wishes to join us in this commemorative event. We’ll gather at 2 PM, roll out at 3 PM, food, music, and general BS from 4 to 6 PM. Thanks to Guild Member Mike L’Esperance who coined the name at a recent Wrench Night …has a nice ring to it don’t cha think?

Banning the elephant in the room…

Nick died from complications due to lymphoma which was diagnosed in January, 2019. Living with cancer is like living with an elephant in the room. But at the shop, he asked the elephant to wait outside during the hours he was there. However, each day started with his cup of tea and 10 minutes on how he was feeling and any accommodations we would need to make. One thing he talked about was how to take advantage of anything positive that we could derive from his experience.

I had talked to Nick about his thoughts on fund-raising for various organizations (the shop had done the ALS bike as a charity effort last year) and he figured that, “…we might as well have something positive come out of this crap.” My own family is close to a young man who is a junior at our local high school. His uncle has been ill from blood-related diseases and Robbie decided to to something positive.

“I got involved with LLS because my uncle, Joel, was diagnosed with acute myeloid leukemia,” says Robbie. “When my mom told me about the Student of the Year campaign I felt like I had to participate in order to help other families going through this crisis just like mine. Last year, I raised around $5,000 in the Vermont Chapter, and this year I’m at around $2,800 in the Upstate New York Chapter.”

Click to support a good cause, a good kid and something we can do in Nick’s memory.

We will carry on at the shop and the Guild. Thanks to all who have come forward to lend a hand, offer condolences, or just keep the vibe going. While Nick is missed dearly, his fingerprints are all over the place, his special tools and fixtures continue to make working on these bikes a joy and his trove of written procedures and tech tips mix engineering and his dry Vermont wit – always fun to read.

Hope to see you around the shop sometime soon and especially on the last Sunday in April.

Dear Jack, families, and the CBE team. I may sorry for your loss and my sincere condolences to you all. I lost my best friend a few years ago. it is painful. The good side is that you will all have memories to share.
Brent King

Sorry to hear this news. We have lost several very talented British Bike experts over the last year. Great guys, a special breed they will be missed. Happy Trails Nick…

Holy Snap! I had just stopped by Classic Bike not long before I heard of Nicks passing. He did mention he had been and still was battling cancer. He gave me the 25 cent tour of the shop then we reminisced about our motocross years and the old Lakeview BSA, Bultaco, BMW shop among “other” brands of scoots. Along the way we talked about our years at GE, through General Dynamics years. He had that great personality that went along well with his ability to reason things out while still maintaining his grin. Like Nick I’ve always favored British and/or European bikes and possibly because of that both my son’s have gravitated towards them as well. My oldest rides a Duke and his brother rides an MV. I didn’t realize till now that my grandson’s birthday is the 26th of April. His name is Dominic.. Go figure right? Rest in piece old friend..

I’m playing catchup on this page which I ran across looking for news about the ride and thinking about Nick on his birthday a few days ago. It’s always difficult to think that Nick is gone and always will be difficult I’m sure. It was great seeing him and his big smile again when I was in Vermont last fall and it’s sad that I will never be able to do so again. I made a donation in Nick’s name to the LLS fund too – thanks for posting the link.

Just Installed the Kit on my 1968 Bonnie

Completed testing and everything is working very well. Have started it on shop air and bottle air. Air bottle is in one of the saddle bags. Works well. Starts well. Getting used to the process. Have been using the center stand. Your product has saved another old bike from being sold or stored. Thanks.
… Read more “Just Installed the Kit on my 1968 Bonnie”

The system worked like a charm, every time, once we got it dialed in and I had fun starting it with just one hand to show off! The kit is solid, reliable, extremely well engineered with all first-rate components and is easy to install on the stock kick-start mechanism. An elegant solution for those of… Read more “The KM Kit was Easy and Fun to Install on my 1970 Bonnie”

Let’s See if it Will Work on a BSA

I spent from April through June of last year rebuilding the thing, restoring it from sitting around for 25 years and I couldn’t start it, or had great difficulty in starting it with just the kick-starter. Old age maybe, for some reason I don’t think my leg has as much umph as what it did… Read more “Let’s See if it Will Work on a BSA”

Here’s a pic of the Tiger complete with sun, sea and me!! I got Jen to take it in the back garden. 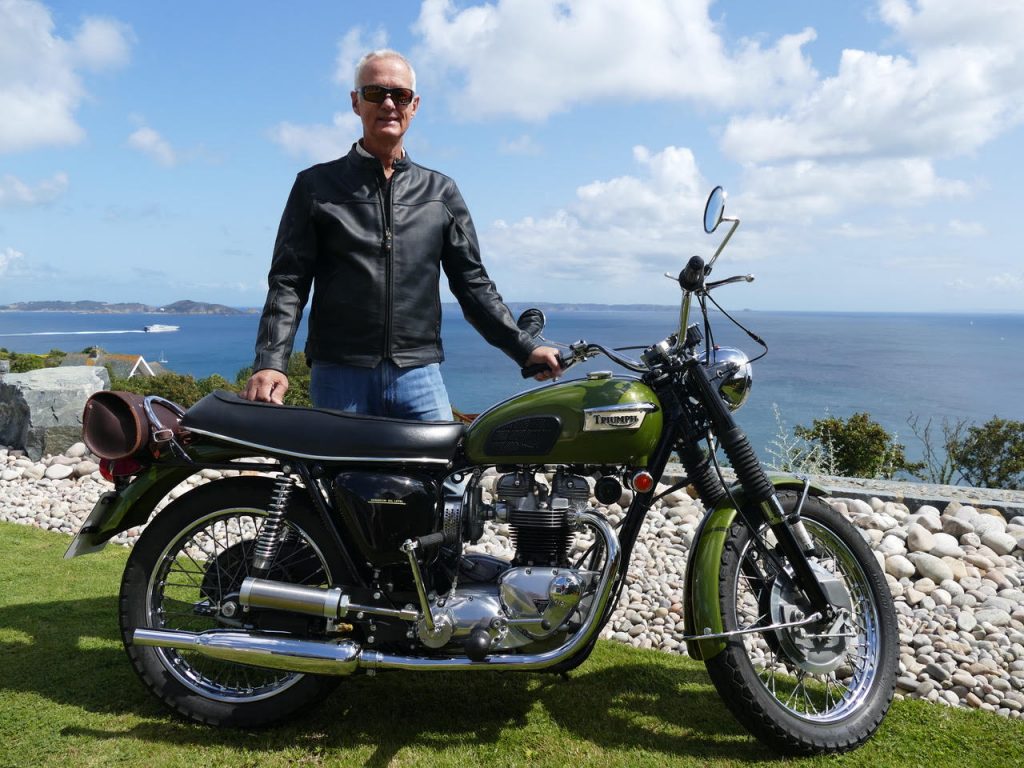 I have some carburetor problems at the moment, so not riding… Read more “First “European” system delivered to a Brit who lives on the Channel Islands”